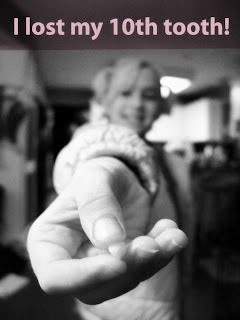 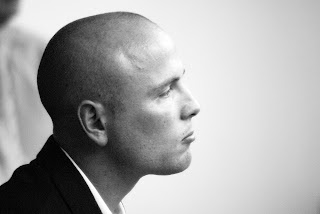 Sometimes we get to tagalong to some interesting things! Tonight? A press conference at Stillwater High School, home of Matt Holliday. They were retiring his numbers from his high school teams tonight. I'm not much into sports (as those of you who know me realize) but I find the "people angle" interesting.

I was impressed with this guy! He seemed very real and was more people-oriented than I expected. He had questions that gave him the opportunity to boast, but he was far from arrogant. Actually, I found him surprisingly humble. But not the slimy "I-want-you-to-see-me-as-humble" kind of thing ... genuinely thankful to be where he is and truly respectful of others. I always appreciate and respect that when I see it (and it doesn't feel like someone saying what he/she "should" for an audience). 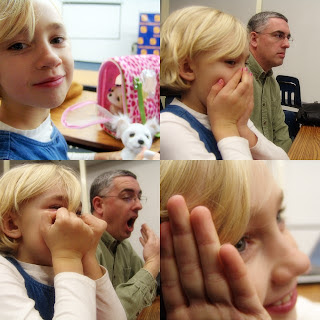 My little one came prepared (little puppies in a carrier - one day they will probably be real!) but soon found herself stifling yawns and passing them around as we waited. She was so cute earlier ... she said she wanted to go so she could learn more about soccer. Soccer? She thought he was a soccer player. While we were waiting at the press conference, she asked who was going to be there. I told her, "Mr. Holliday." She said, "Who's that?" Of course, it got a laugh. And then she got shy. Maybe one day my little Miss M will realize what a cool opportunity this was! I'm actually a little stunned my teenager decided not to come. He's the one who is into sports and even had Matt Holliday on his fantasy team last year! Hmmmmm ... maybe he's just tired of being cooped up in the house with 3 girls (me, M, and Daisy)!

For you fans ... a few more Matt Holliday photos are here (forgive me, I'm not taking time to edit much of anything tonight): Matt Holliday Press Conference

In Search of Fire 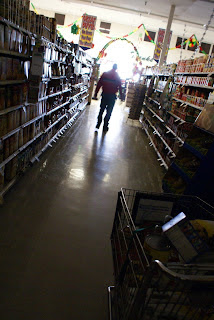 Amazing what freezing rain can do! Power is out everywhere (I'm blogging after the fact) and has been for several days. I feel like I have it made because we only lost power for a day. The store down the street was open for a few hours on generator power ... no lights, but they could ring you up! Normally I would stay cozy and warm but that's why I'm out and about. I'm concerned about staying cozy and warm! I need fire logs. Just about every store was closed. Thank goodness for this one! It was eerie, however, to be roll-clatter-rolling through dark, quiet aisles.

Look what I finally found at the airport! 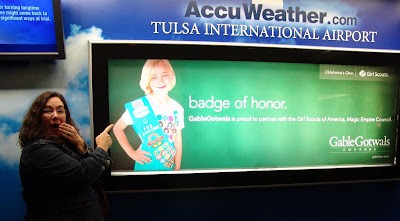 I'm proud of my little girl, who rather accidentally became the poster child (just happened to be with me one day in the summer when a request for a local girl photo came) for this project presented by GableGotwals, a law firm that partners with Girl Scouts! I've been in the airport a few times since this went up, but it wasn't until a recent trip to New York (including a visit to the national Girl Scout headquarters, or GSUSA as I've come to know it).

Shall I shamelessly blog for Girl Scouts of Magic Empire Council? (I have to admit, I love it when these things show up in my media alerts!) My own background with Girl Scouts doesn't go much beyond one year of being a Brownie, so this is pretty new to me. But I am so impressed with the opportunities offered to girls! It's like a "design your own" leadership experience that could really lead girls into great places ... Not to mention gaining the life skills that are such a wonderful part of Girl Scouting! Our council serves nearly 13,000 girls and volunteers with offices in Tulsa, Stillwater, and Muskogee. We are in the process of "realigning" and will be uniting with two other councils and by June of next year will be making a difference across eastern Oklahoma.

So ... I'm not only proud of my little girl, who is a fantasic little Girl Scout, I'm also proud to BE a Girl Scout! Did you know adults can be Girl Scouts? I guess I never thought about it. But all of the leaders, trainers, and volunteers are members - men included! 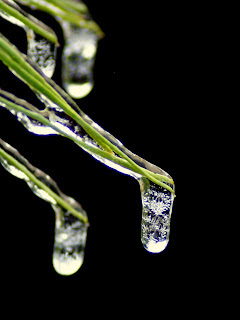 We woke up to ice today. Naturally, it's only a matter of time before the camera emerges. This little ice drop fascinates me ... it looks like miniature fireworks inside! What I love about days like today is mostly because it's a wonderful excuse to light a fire and feel cozy (even if I am still working on things in the meantime). The kids love the thought that if the weather gets worse, they might get to do this for a few more days instead of going to school!

Click on the photo below more photos from the icy storms in Oklahoma:

M had a great idea ... She wants to make a Web site that shows what my offices are like because some kids might not get to see a Girl Scout office. She started describing it and how the home page would say something like, Girl Scouts Rock!

I delightedly shared the phrase that I feel like I own ... Green Girls Rock! In my mind I have Wicked, Girl Scouts, and myself all wrapped up in a marketing campaign. She exclaimed, "Momma!" In a shocked and horrified tone of voice, she said, "That's for sick people!" Her reference to cartoons and sick people turning green were cited. I'm happily thinking - WOW! We just had our first marketing debate! How cool is that?
Ingrid
*sent via AT&T wireless* 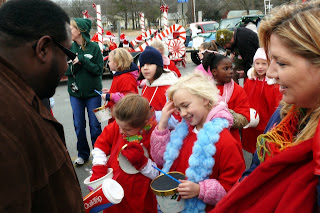 Look who we found! I can't believe I didn't think to ask any cousins about who would be at the Christmas Parade ... but we found a few. Click on the album link below for all the photos (including some beautiful ones of "Miss B").